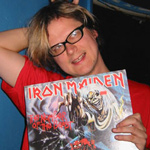 BIO
Michael Donaldson AKA Q-Burns Abstract Message is one of the United States' most dynamic and eclectic DJs. His sets have been moving dancers around the globe for many years now and Q-Burns' fan base includes many die-hard devotees. His sound is that of a big party going down, unique and diverse house tracks glued together by pure funk.

Donaldson has been DJing for over ten years. Inspired by funk pioneers such as Kool and the Gang, Earth Wind and Fire, and Marvin Gaye, Q-Burns sought to move his crowds with current house sounds in the spirit of classic soul music. His DJing style developed during extended stays in San Francisco where he found himself influenced by the 'good time + anything goes' attitude of his friends in the Hardkiss and Wicked crews. Now, Q-Burns DJ sets are tightly wound coils of funk and house, with Donaldson himself found moving and waving around as frantically as the dancers on the floor.

Q-Burns Abstract Message's DJing career has had many impressive highlights. Q-Burns has toured as a DJ in the US with artists as renowned as The Chemical Brothers, Fatboy Slim, Gus Gus, Josh Wink, Meat Beat Manifesto, and Lo-Fidelity All Stars. He has also toured internationally in such countries as England, Germany, Iceland, Chile, Australia, and Russia. Q-Burns Abstract Message was actually the first US DJ to ever play in Siberia.

With the June 2001 release of his second album for Astralwerks ( Invisible Airline ), Q-Burns' fan base will grow even larger. His DJ gigs will also include many exclusive remixes from the album as well as unreleased tracks.