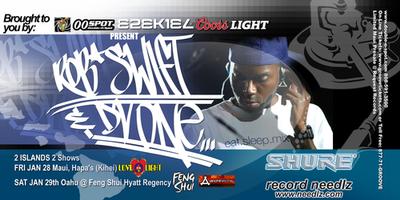 LEGENDARY TURNTABLIST PERFORMING IN HAWAII
Shure artist endorser Rob Swift to perform at club and host clinic
NILES, IL, January 3, 2005 - Shure Incorporated, makers of the phono cartridges of choice for champion DJs worldwide, is bring artist endorser Rob Swift to the Hawaiian islands for two special club events and an in-store clinic. The events will be a rare look at one of the art form’s pioneers in the music and technique of turntablism.

The two events will feature Rob Swift, formerly of the turntablist group the X-ecutioners, and Seattle DJ DV One, of the Rock Steady Crew. The first event is Friday, January 28th and will be held at “Hapa’s”, 41 East Lipoa, Kihei, Maui. The second event is in Honolulu on Saturday, January 29th at &#147Feng Shui” in the Hyatt Regency Waikiki Resort & Spa.

Before Saturday’s event, Rob Swift will demonstrate the art and answer questions from fans at an in-store clinic at Creative Sound & Lighting in Kanoehe.

“Shure is proud to be a part of many of the amazing performances we have seen over the years from the world’s premier DJs,” said Bill “Needlz” Oakley, Phono Product and DJ Artist Relations Manager of Shure. “With the events on the two islands and the in-store clinic, we hope we can bring another unique performance to the aspiring turntablist in Hawaii. We’re thrilled to contribute to the growth of the art in this way and work with the artists who endorse Shure and continue to push the boundaries.”
The clinic is intended for all ages and various interests in turntablism. The club events are 21 and over.

Shure M44-7: Needle of Champions
The Shure M44-7 phono cartridge is the legendary battle needle chosen by DJs and turntablists. The needle offers ultra-high skip resistance and ultra-high output. Combining Shure’s unique wide-diameter Type S cantilever with a tracking force of 1.5 to 3.0 grams, the M44-7’s rugged construction is highly durable, without unduly wearing your vinyl. With a 9.5 mV output, the highest on the market, the M44-7 produces a very powerful and resonant sound that has been tested by many of the top DJs in the world, including world champions such as Qbert and Mixmaster Mike, and has been endorsed by artist such as A-Trak, The World Famous Beat Junkies and the X-ecutioners.

About the Artists
ROB SWIFT
Whether he’s droppin’ beats hard and strong or rockin’ a salsoul beat with jazz master Bob James, turntable composer Rob Swift is all killa and no filla on the decks. A dedicated artist, a turntable maverick and the ablist DJ to come along since the form's mixmaster pioneers, it’s Swift’s destiny to be a major deal on the wheels of steel.